Variations on a Squeeze

Variations on a Squeeze

This deal from the final session of the Rosenblum round of 32 was a test for declarer: 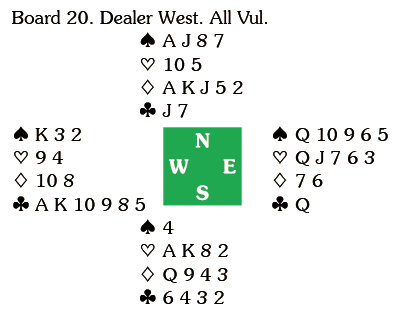 Q, ruffed a club and played the

QJ7 had to surrender.

I can’t explain the bidding, but the play’s the thing.
West started with three rounds of clubs and declarer ruffed with dummy’s jack, cashed the

A and ruffed a spade, on which West followed with the king. When declarer continued with the top hearts and a third heart West pitched his hidden spade and the contract had to fail.
If declarer thought West’s

K was a true card, there is something to be said for playing for trumps to be 2-2. If that proves to be the case declarer can then ruff a club, which will squeeze East in the majors – whichever suit he discards, declarer can establish the extra trick he needs by ruffing it out. This would have worked on the layout that actually existed, as well as the imaginary one.
It was the line adopted by Thomas Paske in the match between Cayne and Allfrey – and was worth +750, as he was doubled.