Commentating on a bridge match is a dangerous occupation; it is all to easy to be blinded by the sight of all four hands, forgetting that the players can only see 13 cards during the bidding. It is also dangerous to make comments about the bidding without a sight of a convention card! Witness this deal from the third session of the Rosenblum round of 64: 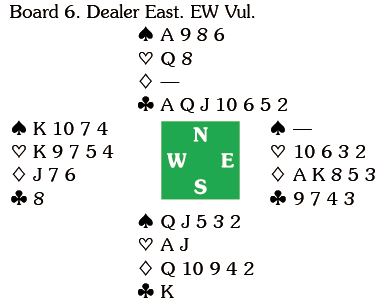 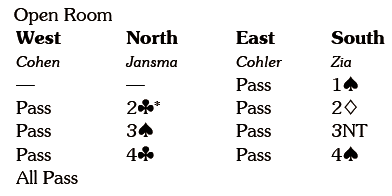 is a good contract. Assuming spades are not 4-0,declarer could ruff a diamond lead in dummy and play a low spade, keeping control. Even with the 4-0 break West still has to lead a minor suit to defeat the slam – here West went for the

5 and declarer won and ran the

Q for an effortless 12 tricks.
One commentator described it as an unlucky board for NS, with Par being for them to play 6 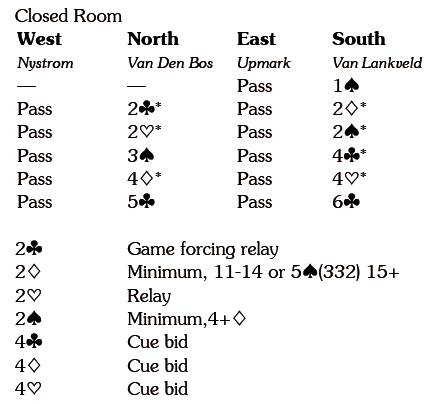 North had the option of responding 4

at his first turn, which would have promised a void. Another unlucky commentator wrote it would be perverse not to show the clubs, not appreciating that the initial response was artificial.
Assuming the bids after North had shown his spade support were control showing, there is a case for West to double 4

4 and declarer won in dummy, ruffed a diamond and drew trumps, pitching diamonds from dummy. Our eager commentator opined that East needed to lead a heart to defeat 6

, pointing out that it isn’t easy to do that looking at the

AK. That’s spot on, but he then pronounced that even without a heart lead West would be able to defeat the contract by ducking in spades. If at this point declarer lays down the

A and then plays a spade to the queen that’s right, although West can also win and exit with a red card. However, declarer had no intention of going down – he played the

8 and put up dummy’s queen, claiming his contract. If West wins declarer can pick up his spades and still has a heart entry to dummy to enjoy the fifth spade and ducking does not help at all.

That’s not quite the end of the story.
You recall the comment (no doubt tongue in cheek) about South playing in 6

This was the auction from the Closed Room in Fleisher v China Open 2:

6 (not out of turn) and declarer more or less followed the line already described.
In the other room the auction started 1

and West led his club, which meant declarer had no chance.

. One lucky South made 6

when West lead a heart.