Sometimes a contract can be more or less guaranteed by adopting a particular line of play. A perfect example cropped up in Round 8 of the Rosenblum Teams: 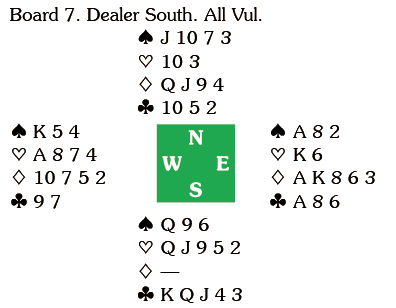 10 and declarer won in dummy and cashed the

A. When South discarded the contract was up in flames.
With seven top tricks declarer needs only two extra ones from the diamond suit and the indicated line of play is to cross to dummy and play the

10, which gives you a 95% chance of scoring the tricks you need.
The declarers who received a club lead can be forgiven for going down, but those who went down after a heart lead must be kicking themselves.
It was especially important in the in the match between Emerald and Ventin where at one table the contract was 3NT redoubled. Both declarers were successful, but one was scoring 1000 as opposed to a mere 600.