The last set of the Mixed teams was action packed. With three deals remaining Manfield led 109-81. Wilson must have suspected they were behind and both pairs were pushing hard.

On Board 26 both teams reached 6

Q853 and the essential diamond lead was found at both tables – one down and no swing.

On 27 North-South’s combined holding was

AK864. Chip Martel made an interesting observation on BBO. After 2

,a splinter in support of spades. Chip pointed out that it is possible to use 3NT to show an unspecified splinter with three-card support ,so that a jump to the four-level always has four card support.
On a good day clubs will behave and East will hold a doubleton spade king, but this time West held

reached in the Closed Room was hopeless, so Manfield collected 11 IMPs by stopping in game. 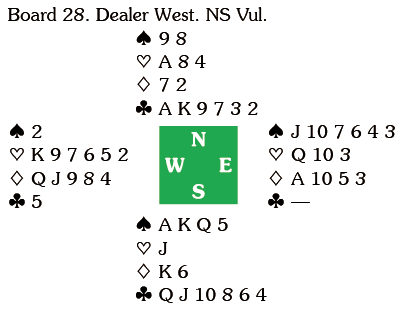 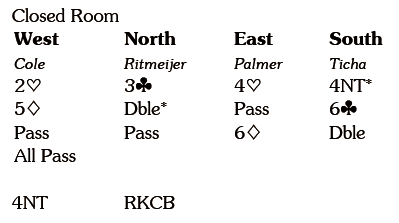 When the opponents overcall your Roman Keycard ask, you can use double to show 0/3/5 keycards, with Pass promising 1/4 and the next two cheapest suits to show 2 keycards, the higher also promising the trump queen.
6

was a great save, and although declarer lost two trump tricks, one via a ruff, the other by failing to drop the then singleton king, it was still a great way to finish for the new World Mixed Team Champions.