In the second session of the Rosenblum round of 64 the trailing teams must have been happy to see this type of deal appear at an early stage: 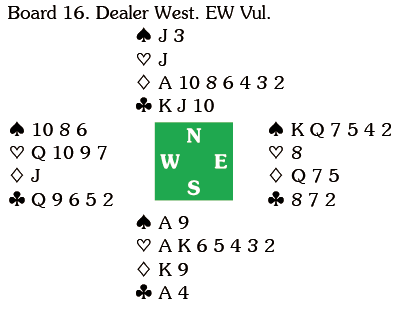 is clearly a good contract – but it is not quite a laydown.

Q and declarer ruffed and passed the

K and declarer won and cashed the

K. When the jack appeared one option he must have considered was to play three rounds of clubs, ruffing, then take the top heart to pitch a spade, the line followed by Tony Forrester (amongst others) in another match. In fact he played a second diamond to the ace, and then cashed the hearts, pitching a spade. When East ruffed it appeared that declarer would have to find the

. You can squeeze West in hearts and clubs, but there is no particular reason to do that and some played East for the

Q and went down.