Sometimes when you go down in a contract you spot a winning line in the post mortem and think ‘I should have seen that’. Take a look at this deal from the final session of the Rosenblum round of 16. 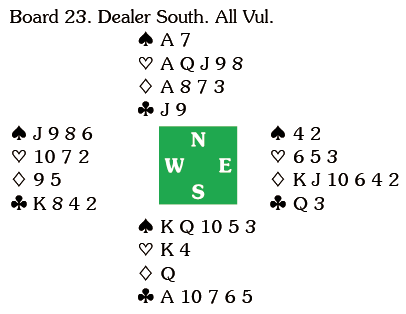 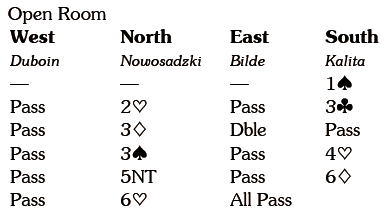 In the other room NS has stopped in 3NT and emerged with twelve tricks.

Q and declarer won with dummy’s ace, dropping the jack from his hand, and drew trumps pitching the

5. He continued with the

9 and West won and switched to a diamond. Declarer won, cashed the

A and then played a spade to the ten. When West produced the jack and played a second diamond the contract was four down.

Was it possible for declarer to make the contract?

The opening lead suggested that East held a doubleton club and he had followed to three rounds of trumps. He had doubled 3

, which suggested he held some length in that suit, which might persuade declarer that East is unlikely to be long in spades.

Q. West is already under pressure. Discarding a spade is immediately fatal, and pitching a club allows declarer to play the

9, establishing enough winners. So, West must part with a diamond. Now declarer cashes the ace of diamonds to reach this position: 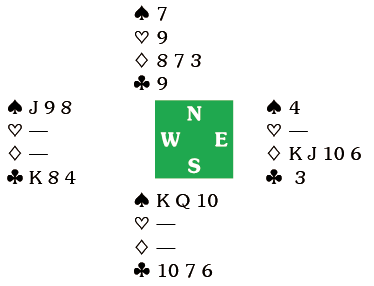 When declarer plays the

Beautiful, as I’m sure you will agree, but after the opening lead declarer can get home by the prosaic play of returning a club.