Distributional hands can be interesting, but some are more interesting than others. One of the most unpopular patterns is the 7-2-2-2, because the long suit may become a liability if the defender’s exit cards can be removed.
This was from Round 6 of the Rosenblum: 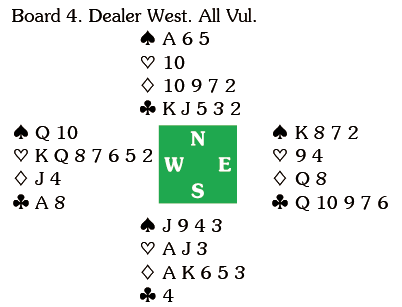 Nine tricks might appear tricky, but on this layout its virtually impossible to go down. West led the ]K and when declarer ducked he was already struggling. He tried the

Q, but declarer put up dummy’s ace and played back a spade. If East had played a low card declarer would have needed to put up the jack, but naturally East went in with the king to play a second heart. The appearance of the

10 and the 2-2 diamond break meant declarer was now up to nine tricks.
If West tries a passive approach, switching to a diamond at trick two, declarer wins, cashes second diamond and then plays a club, putting up the king if West follows with the eight. Then, one way to get home is to cash dummy’s

A and exit with a spade.

In the other room, Kalita and Nowosadzki were allowed to play in 2

, which might have made, but even one down was worth 11 IMPs.