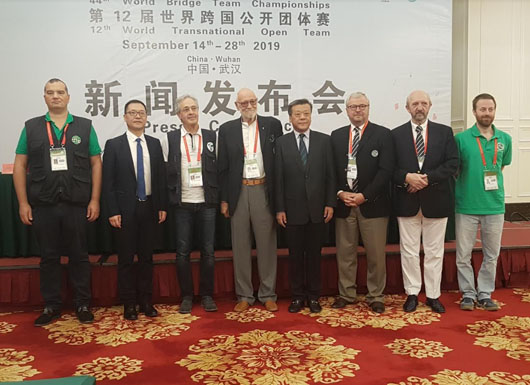 The traditional WBF Press conference was held on Friday morning at the venue.

Gianarrigo Rona started by recalling that this year sees the 20th anniversary of the recognition by the International Olympic Committee of the WBF as an International Federation. The WBF is invited to all IOC meetings. Important steps in the process of Olympic Integration was the inclusion of Bridge as one of the sports contested at the 2018 Asian Olympic Games, and the same inclusion for the 2022 games.
Important novelties in these championships were the introduction of a fourth series, the Wuhan Cup for Mixed Teams, and the increase in the number of tables shown on BBO to 32. The aim for 2021 is to have all 96 tables shown on BBO.
The meeting rooms here in Wuhan were exceptional and Rona thanked the Chinese Contract Bridge Association for their support.
Rona concluded by stating that “China is really the Home of Bridge”.

Guo Yujun, Vice-President of the CCBA introduced the Wuhan Cup. In following the examples of Bermuda in 1950 and Venice in 1974, Wuhan wished to present a trophy for the Mixed teams championship. The Wuhan Cup is silvery white, made of Aluminum, and 50 cm high.
It celebrates the Wuhan spirit: ‘Dare to be the First and pursue Excellence’.

The speech part of the Press Conference was followed by the signing ceremony of the agreement between the WBF and the city of Wuhan regarding the presentation and naming of the Wuhan Cup.
By this agreement, the city of Wuhan not only donates the Cup to the WBF but also promises to provide the winners of future editions of the Mixed Teams championships with replicas of the original. 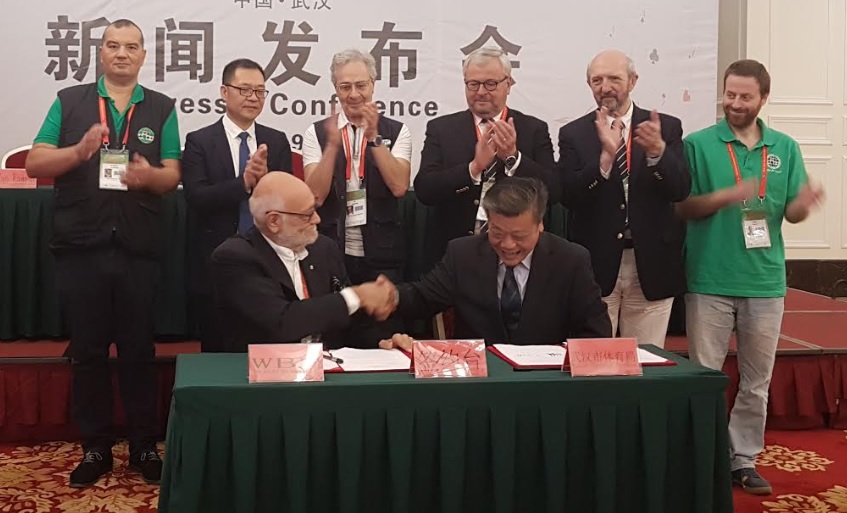 The floor was then opened to questions.

A representative of Wuhan radio wished to know what Rona’s impressions of Wuhan were. Rona called his impressions ‘more than positive’. Wuhan is a truely international city, with the World Basketball Championships, the World Bridge Championships and the World Military Games all within the space of two months. Everybody is made to feel Welcome.

Another Chinese reporter wished to know what positive influence the Wuhan Cup would have on sport in Wuhan. Wang Shenshun replied that this was a special day for Wuhan, as this was the first time an international trophy was named after the city. It would certainly help to promote bridge in Wuhan, which already boasts 10,000 bridge players. He thanked the WBF for allowing the world to see that Wuhan is able to organize internationsl sporting events and in future also non-sporting events.

A radio reporter wanted to know what influence this event would have on bridge in China. Guo Yujun replied that this was the third time that the World Championships were held in China, aftern Beijing in 1995 and Shanghai in 2007. He welcomed the fact that the Transnational Team Championships permitted many Chinese bridge players to taste the athmosphere of international bridge. It will give great publicity to the game of Bridge in China. Live broadcasts from the event have reached 200,000 viewers, ant the Internet has also helped in getting the sport of Bridge to be better known in China. Teams from 42 countries and regions were present in Wuhan and this is a great way to get the city of Wuhan known in the rest of the World. Also the naming of the trophy for the mixed teams to be named after Wuhan will leave a lasting mark on the world of bridge. He wished to thank the WBF for their support in achieving this.

Barry Rigal (IBPA) asked if a training programme would be introduced for BBO Operators and Jan Kamras replied that any problems would be seriously considered.
Potential venues for upcoming WBF Championships are:
2020 China or Istanbul
2021 Marrakesh, Morocco
2022 Poland
2023 China Hong Kong
2025 Bermuda

Herman De wael of Antwerp, Belgium, has been the Scribe for the Appeals Committee of the EBL and WBF since 1997, and the Assistent Reviewer since the abolition of Appeal Committees. A frequent contributor to the Daily Bulletins, mostly on statistics and history, he is often referred to as the Proofreader Extraordinaire.