When you are playing a hand, you have to consider the possibility that the key suits may break badly. Judge for yourselves if declarer did that on this deal from Round 19: 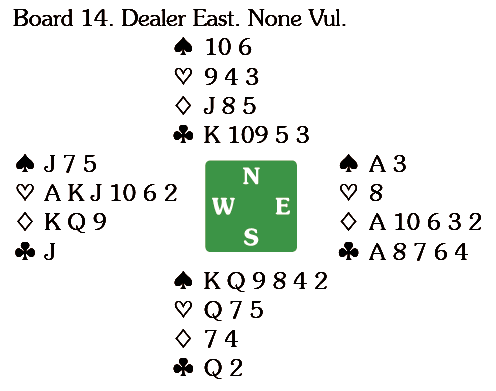 -3NT and taken all the tricks.

Here EW were more ambitious, and given that I have no certainty as to what 2

meant the key bid may have been West’s decision to go beyond 3NT.
South led the queen of spades and declarer won with the ace. One possible line now is for declarer to cross to dummy with a heart and play the

J, discarding a spade, another to cash both top hearts pitching a spade and then play a third round.
Declarer preferred to play back a spade and South won and continued with a third spade, making sure that declarer would not have a discard on the

J. North ruffed with the

8 and declarer overruffed, crossed to the heart, ruffed a heart, cashed the

A, played a diamond to dummy and cashed the

K, claiming when the missing trumps appeared.
It occurred to me that if North had started with four trumps and South with four hearts that the line chosen would fail. However, if declarer cashes a second heart and then ruffs a third one (North discarding) and then cross-ruffs, it will be possible to reach this ending: 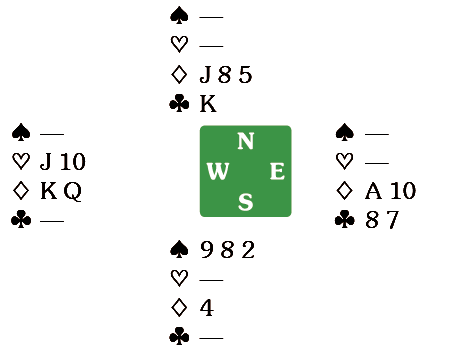 Now declarer can cross-ruff the remaining tricks.
Interestingly, were the cards to lie in this fashion an unlikely initial trump lead would defeat 6

.
Of course the trouble with this type of hypothetical scenario is that you can create a situation where you manage to go down in a contract where the suits break reasonably!
What one can say is that if North happens to have started with four diamonds and four hearts then ruffing a heart and then cashing the

A will result in defeat, unless declarer plays double dummy. You might like to consider how you would play if North refused to ruff the third spade – which would surely be the right play if North had started with four trumps. If North started with four diamonds and three hearts then after cashing a heart and ruffing a heart declarer must not cash the

A, instead playing a diamond to the king, cashing the

K and then play winning hearts – and that would see declarer go down even with hearts 3-3. The conclusion:
North should refuse to ruff the third round of spades!

, 5 in the Mixed and three in each of the other three events, with only two going down.