The Youngsters of Today

The Youngsters of Today

The BBC is currently running a series celebrating the 50th anniversary of the televising of Monty Python’s Flying Circus (I suspect some of you may now be hearing Sousa’s Liberty Bell that was used as the show’s theme tune). One of my favourite sketches was entitled The 4 Yorkshiremen. They reminisce about the good old days and the sketch concludes with the line ‘But you try and tell the youngsters of today that… and they won’t believe you’. 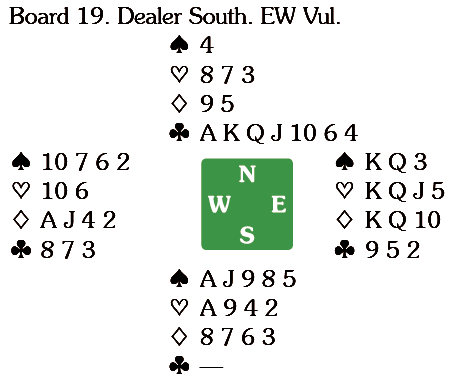 Watching this deal from Round 14 I saw North open 3NT. When I was a lad it was usual for the solid suit to be accompanied by at least one other stopper, but times have changed.
When East doubled I wondered if South might be tempted to redouble – after all, 7+2 =9, but then I noticed that South’s club void might not be an asset (especially if North’s suit happened to be diamonds). Nevertheless, I was willing to speculate that at there would be at least one table where the contract was 3NT doubled.
Our resident statistician, Herman De Wael (Herman assures me that it should be wael, but it would take too long to explain why) advises that was precisely the case, declarer finding the lack of a club in partner’s hand an insurmountable obstacle.
If only North had held an outside stopper – but try telling the youngsters of today that.