The Wonder of Wuhan

The Wonder of Wuhan

Bulletin number 9 of the 2019 World Bridge Championships carried an announcement about IPBA awards for play in online events. Incredibly, a candidate deal was dealt in a Robot tournament on Wednesday night – and the declarer was in Wuhan! Simon Stocken, eager to get his hands (metaphorically speaking) on some cards, had invested US$1.35 to play in an ACBL Robot tournament when this hand appeared on the screen:
This is the deal in question: 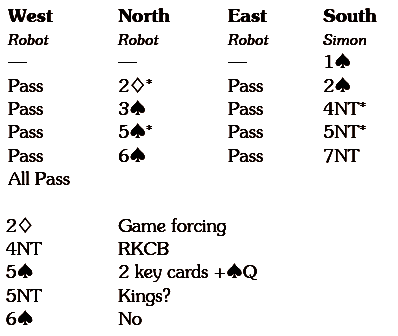 Simon (no mean Poker player) was holding the South cards and decided to go ‘all in’ by bidding 7NT. He knew that partner held the

A, but absent any side kings, must have a little more and if that was in diamonds there would probably be a play for all the tricks.

10 and dummy was a little disappointing:

Simon won with the

A and cashed five rounds of spades to reach this position:

With a nod to Vienna, he cashed the

K and followed it with the

K. So far West, who had turned up with a singleton

J had pitched a diamond, a heart and two clubs. East, who had three spades, had parted with two clubs and a heart and now discarded a second heart.
At this point, these cards remained: 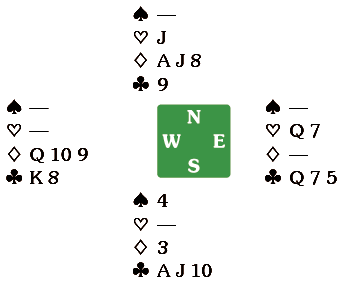 When Simon cashed the last spade, West had to part with a club and the now redundant

8 went from dummy. East could happily part with a club, and then threw a heart when a diamond went to the jack. However, when Simon played the

A from dummy, East became the second victim of the non-simultaneous double squeeze. He had to throw a club and declarer played a club to the ace, felling the outstanding honours and promoting the 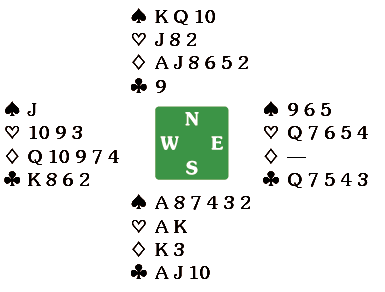