This was the deal that made the headlines yesterday: 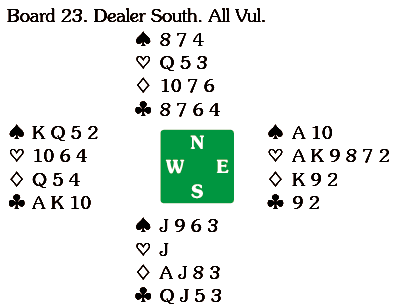 In the Closed Room, Fukuyoshi and Yanagisawa had taken 12 tricks in 4

When West made a support redouble North could not think of anything sensible to bid – neither can I, but some pairs play that a pass in this position is a suggestion to play for penalties.
South led the

J and declarer managed to take all the tricks – it was easy to get the trumsp right and once a diamond had slipped past the ace South was toast. Six overtricks adds up to +3120 and a modest 20 IMP swing.
Remarkably despite collecting another 28 IMPs with slam and game swings USA 2 lost this match 50-56, which says a lot for the resolve of their Japanese opponents.