Board of the Day

Board of the Day

When I asked Herman to check the frequencies on board 23 of Round 20, I was surprised at the answer. What looked like a difficult declarer problem, had been solved by over half of the field. Perhaps it was more of a defensive problem.

Getting North to be declarer in 4

. Over the 96 tables of the four championships, 62 North players became declarers in 4

doubled, while one table managed to reach 4

, one pair even attempted 6

(doubled, of course). So a total of 70 North players were playing in spades.

Eight declarers were faced with the problem of making 4

from the South hand. An extra South had to contend with playing 6

Eight pairs found their spade fit unsatisfactory, and ended up playing 3NT, twice from the South side and six times from North.
This was, for example, what happened to the Chinese Open pair:

Some East/West pairs could not contain themselves from entering the bidding. Only two pair managed a more or less satisfactory defence, in 2

doubled (going for 800 and 1100 respectively). This was the bidding in India – England seniors.

(the deal was a push in the match, actually, as the other table got their 4

Others ended up in clubs. One player essayed 3

This was the bidding in Netherlands – Chinese Taipei (Seniors)

An auction with South becoming declarer in the same contract was:

How would you play 4

on the lead of the

K, East following with the

2, encouraging.
If you decide to duck, West continues with the

Q, East playing the four.
Short of entries to hand, it would now be a mistake to play a spade – you must continue with the

J, covered by the king and ace. Now it looks as if you are well placed and can hope to lose just two spades. However, when you cash dummy’s

A West discards the

5. When you continue with the

Q, East wins and returns the

8. You win with dummy’s jack, cash the

K, discard a diamond on the

Q and ruff a club to reach this position: 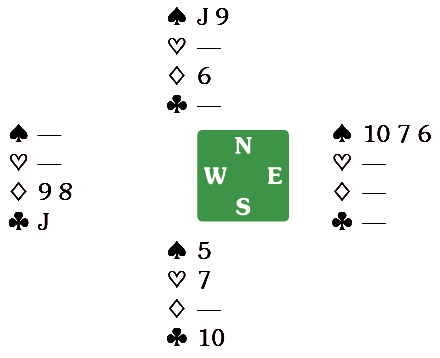 When you exit with a diamond East has to ruff and lead into dummy’s trump tenace.
When 4

10, but it is a much tougher proposition if East leads a heart.

One way to go down is to duck the initial lead, when West will probably switch to a diamond. Declarer wins in hand with the jack and plays a spade, West pitching a club. If declarer puts in dummy’s queen (which sort of feels right) East wins and plays a heart. Declarer wins with the ace, cashes two clubs pitching a heart, plays a diamond to the queen and a diamond, but East ruffs and plays a heart and declarer must lose another trick for one down.
Let’s see how 4

should be played courtesy of Eric Rodwell:

2 and West won with the queen and switched to the

5. Declarer won with dummy’s jack and played a spade. When West discarded a club Rodwell found the winning line when he put up the ace. He unblocked the

K, crossed to dummy with a heart and pitched a heart and a diamond on the top clubs, before ruffing a heart. Down to

AQ he was sure enough of the position to claim ten tricks.
He was the only declarer who played from North and received a heart lead to make 4

This was the full deal: 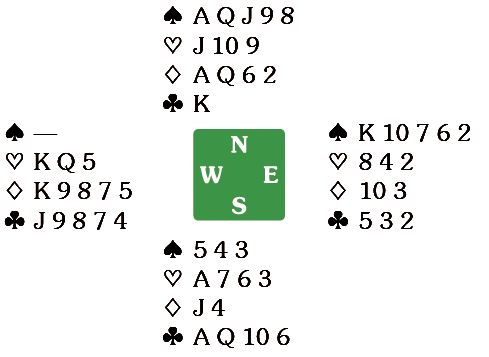