If your bidding is as bad as mine, then there will be no shortage of deals where you are uncertain as how to proceed – the sort of hands that make good copy for series such as the Bridge World’s Master Solvers Club, or A New Bridge Magazine’s Masterpoint Press Bidding Battle.
I wonder if this problem from R20 might appear:

You have the South hand and the auction unfolds like this:

As far as I can see, there are five possibilities:

Pass The objection to this is that you only have one trump trick, so partner will need a decent number of high cards. On the other hand, the opponents are vulnerable.
4

Reasonable, but it fails to convey any strength.
3NT You have a stopper, but the lack of a high card in clubs is a concern.
4

This looks appealing – as apart from anything else partner might have four-card support.
5

Have you made up your mind?
Here is the full deal: 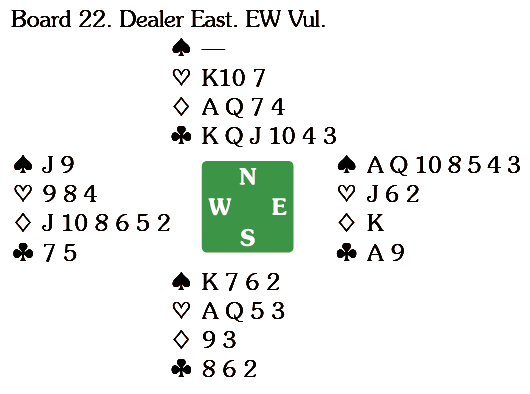 and most of the rest in 3NT, the latter contract being easily defeated.
At my featured table South opted for 3NT, (as did his counterpart after a slightly different sequence).
Of course, any self-respecting Rabbi would make 12 tricks in 6