Misplay this Hand with Me – The last trump 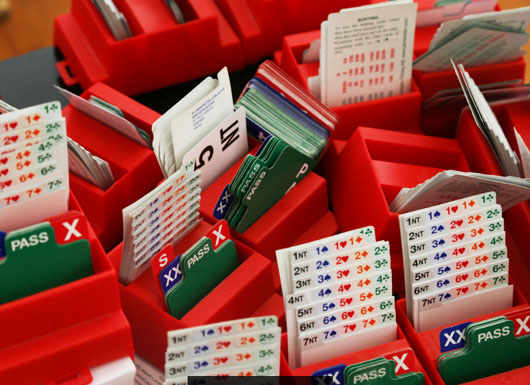 Misplay this Hand with Me – The last trump

Despite my best efforts by the time the last match of the Round Robin arrives we are still in contention and need only14.16 fromour last match to be sure of advancing. The early deals are promising when I pick up:

With only our side vulnerable the player on my right passes and with a nod to the modern style I open 1hearts. My partner responds 2NT which we play as four-card support with at least the values for game. With my modest collection I beat a hasty retreat to 4hearts which ends proceedings, leaving us with this auction:

West leads the five of spades and dummy proves to little better than my hand:

It might be right to go up with the ace of spades and run the jack of diamonds, but as West’s lead suggests he has an honour I play dummy’s jack and am pleased to see East follow with the three.
I can’t avoid the loss of a club, and apart from the trump suit I have to deal with the third round of spades. If the queen of diamonds is onside I might not lose a trick in that suit. The odds play in the trump suit is to cash the ace and lead low towards the queen, which offers a 71.78% chance of losing only one trick. Its conceivable I should play trumps now, but suppose West has started with heartsKJ10 – three rounds of hearts will leave me poorly placed.
Postponing any decision in trumps I exit from dummy with a club and West wins with the nine and plays a second spade. I win with dummy’s ace, ruff a club, ruff a spade and ruff a second club, on which West follows with the ace leaving these cards:

I have only lost one trick so far, so the question is how best to proceed from here?
Eventually deciding it is time to play a round of trumps, I cross to the ace of hearts and West follows with the eight and East the ten. I advance the jack of diamonds but when East follows impassively with two I go up with the ace, and cash the king East playing the nine, and ruff a diamond. Disaster strikes when East overuffs and cashes the king of hearts. That leaves me with a diamond loser so I am one down.
This was the full deal: 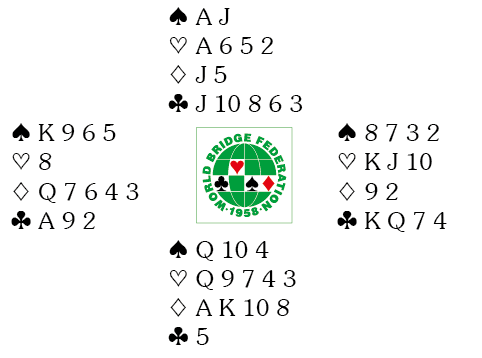 Post Mortem
Did you spot declarer’s error?
The mistake was to cash the ace of hearts. After winning with dummy’s ace of spades declarer ruffs a club, ruffs a spade and ruffs a club. If declarer then plays three rounds of diamonds, East is welcome to overruff, but cannot then play a heart and declarer will be able to cash the ace of hearts and then cross ruff, East scoring only the heartsK.
Declarer could also have considered running the eight of diamonds rather than ruffing it.

In the other room no-one could find an opening bid, so we lost 3 IMPs instead of gaining 12 – and that was enough to cost us a spot in the quarter-finals.