When the last deal of the McConnell semifinal between Tripolar and Edmonds settled on the table in the Closed Room the situation was clear: Edmonds, who has started the session trailing by 30 IMPs, had, despite missing several opportunities closed to within a single IMP. 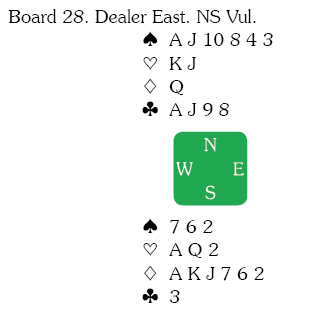 so if Edmonds could make 12 tricks, they would level the scores and, by virtue of having won the match between the teams in the Round Robin, advance to the final. 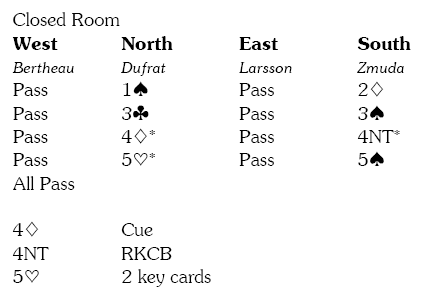 The first issue is how to tackle the trump suit? The odds play is to take two finesses, giving you a 76% chance of losing only one trick. However, entries to dummy are in short supply. If you take the opening lead in hand, cash the

A, ruff a club and take a losing spade finesse there are various layouts where 11 tricks will be the maximum.
Suppose you win the lead with dummy’s queen and play a spade to the ten?
East discards a heart!
You overtake the

K with dummy’s ace and play a second spade, ducking when West plays an honour. You win the club return, overtake the

Q and play the top diamonds pitching clubs. When the suit divides you play another diamond and West is helpless. If she discards your last club goes away and you can then play a spade. If West ruffs you overruff, ruff a club, ruff a heart and draw the outstanding trump. That’s +680 and a place in the final! 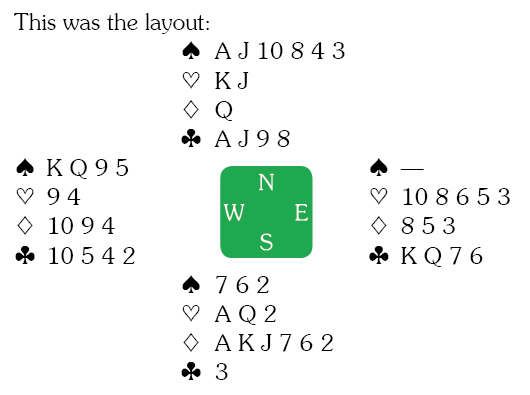 Alas, declarer took the heart lead in hand and cashed the