Three Deals that shook the World

Three Deals that shook the World

The match between the reigning Bermuda Bowl champions and Cooreman Belgium was a terrific struggle. Going into the final session Zimmerman led 90-77. The final session featured three dramatic deals. With six deals remaining the lead was down to 9 IMPs. 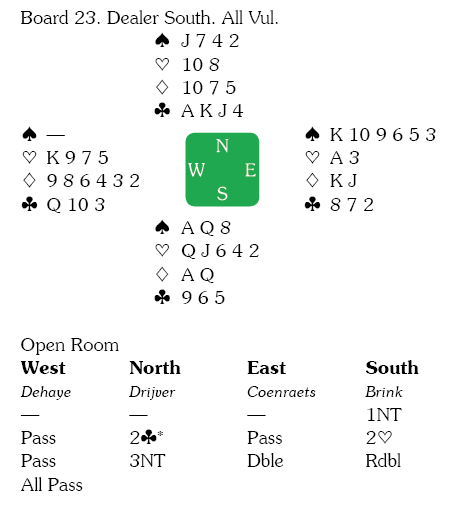 You can bet a Euro to a cent that East’s double was asking for a spade lead. With none at hand West went with the

6 for the seven, king and ace. Declarer must have feared the worst, as West was likely to hold one of the heat honours as well as a significant number of diamonds. He continued with a heart to the ten and ace and back came a diamond – miraculously (a 0.3060 miracle to be precise) it was the jack, which meant dummy’s ten was now a winner. Declarer continued with the

Q and West won with the king and exited with the

9 to dummy’s ten. A spade to the nine and queen saw declarer continue with the

J and when East discarded the

2 a club to the ace was followed by a spade to the ten and ace. East had pitched one spade, but had also played the ten and nine, so declarer could exit with the

8 for the king and ace and declarer played a club to the king, a spade to the queen (West pitching the

3) and a heart for the ten and ace. Back came the

J and declarer won and played the

J, West winning and exiting with a diamond to dummy’s ten. A spade to the ace and the

Q were followed by a club to the ace for eight tricks, +120 but a 13 IMP loss.
A part score recovered 3 of those IMPs, and was followed by: 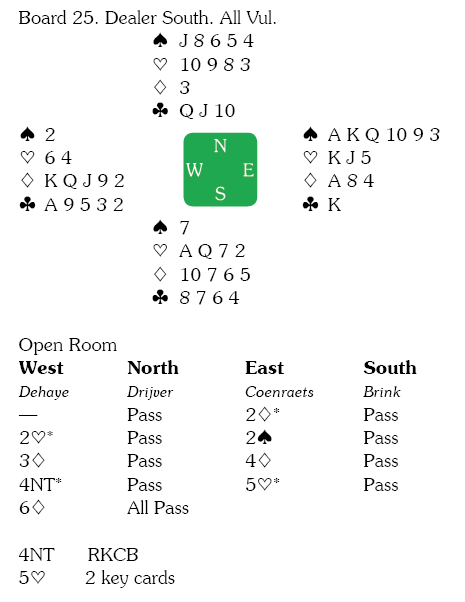 A and switched to the

4. Declarer won with the king, played two rounds of trumps, ruffed a club, cashed the

A, ruffed a spade, drew trumps and claimed, +1370.
Declarer would have had a tougher assignment if South had led a club. He wins with dummy’s king and might easily go wrong, for example cashing a top spade and ruffing a spade, relying on reasonable breaks will fail.
One line that works is to draw trumps, North discarding hearts. Then declarer must play a spade to the ten and cash two more spades discarding hearts. Then he ruffs a heart, cashes the

A and exits with a club forcing North to win and lead into dummy’s spade tenace. Wouldn’t that be something! 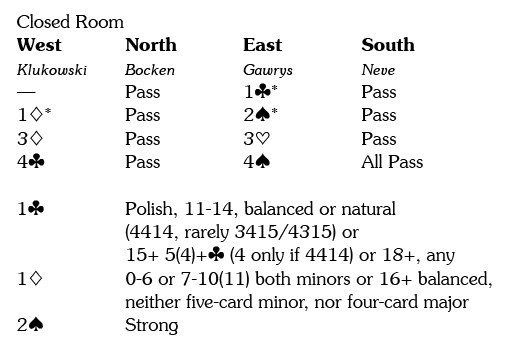 It was just as well that EW stopped in game, as here West would have been the declarer.
South led the

7 and declarer won with the king and played four rounds of spades, North winning and switching to the

9 for the king and ace. South cashed the 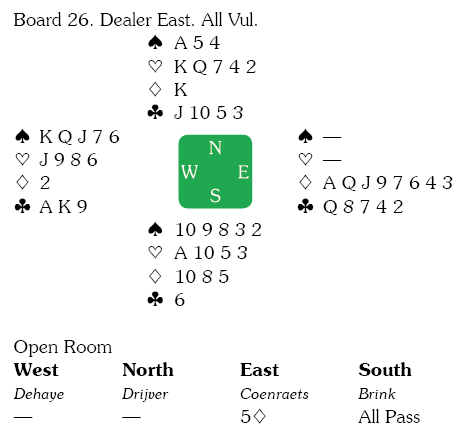 As you can see, the situation in diamonds is such that declarer can always take 12 tricks. He ruffed the heart lead, went to dummy with a club and played a diamond, +620.

6 and declarer took dummy’s ace, played a diamond, drew trumps and claimed all the tricks when North pitched a club, +640 and an IMP.
Had East opened 6

(as did Joe Grue for team Fleisher or David Calipetre for The Black Swan) the world champions would have been eliminated!