Eyes on the Prize

Eyes on the Prize

Here is a deal from Round 2 of the Mixed Teams, and with it an early bid for a brilliancy prize (if there were such a thing at this championship).
With neither side vulnerable, you are South with one of my usual rubber bridge hands, and you hear this auction:

response shows at least four hearts, and West’s 1] bid is usually a weak no-trump hand type without four hearts. What do you lead?
This was the full deal: 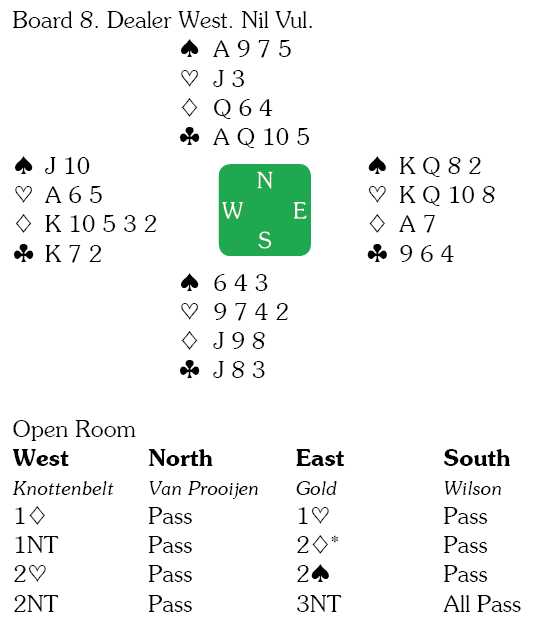 . Having investigated fits in both majors and found them lacking, the English pair settled on the inevitable destination for such auctions.

North led a club around to declarer’s king, and Knottenbelt played on spades. When the defenders had only three club winners to cash, she claimed her contract. E/W +400.

How easy it is to mentally tune out when you pick up a shapeless 2-count. Had he done so, though, Michal Bell would not have found the way to earn a swing for his side when presented with the lead problem posed earlier. A reminder that this was the auction he heard:

The bidding has told you only that dummy has a weak no-trump hand type, that the opponents have a 3-4 heart fit, and declarer has at least one spade stopper. Michael Bell duly tabled the only card in his hand to defeat the contract, the

J. Chapeau!
No matter how declarer played, the defence would make four club tricks and the