If Nicola Smith send you a deal you can be sure it will be something special. This came up in the last qualifying round of the Mixed Teams: 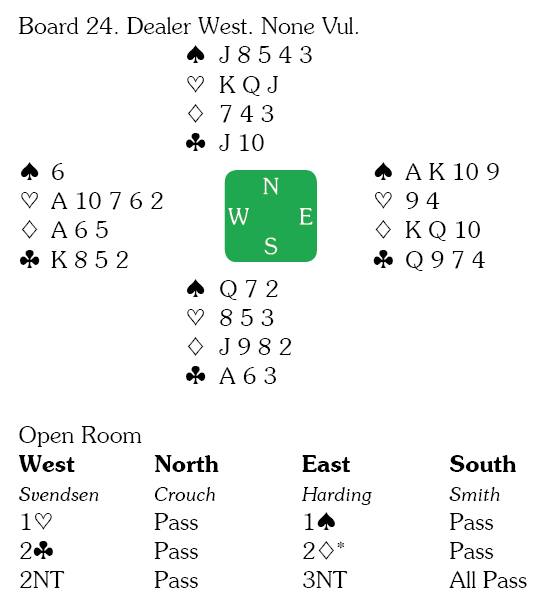 4 and when declarer played dummy’s nine Nicola won with the queen and switched to a heart, North winning with the jack and returning a diamond for the ten, jack and ace. Declarer’s next move was a club for the ten, queen and three. When declarer continued with a club to the eight, North won with the jack and played a second diamond. Now declarer had no way to score more than eight tricks, which resulted in a swing of 10 IMPs.
The deal transported me back in time to an edition of England’s Grand Master Pairs where I was partnering Rita Oldroyd. During the event Bob Rowlands was playing in 3NT and after the opening lead he attacked a diamond suit where I was sitting over dummy holding

Axx while dummy had

Kxx. I had a holding in spades that would be enough to beat the contract if partner could get in and switch to the suit, but my only possible entry was the

A. I had seen Tony Forrester make a defensive play of this type in the European Championships, so it was easy enough to duck dummy’s

K. Sure enough, when Bob continued with a diamond to the ten Rita won with the jack and returned….a diamond!