Welcome to the Live News feed from the 16th World Bridge Series in Wroclaw.
We aim to keep you updated constantly throughout the Championships.

Gunnar Hallberg is a real veteran: he won two World Senior Teams titles in 2009 and ’10, long before his team-mate Simon Hult won the World Junior Teams in 2018. Guy Mendes de Leon and Thibo Sprinkhuizen won bronze at those same championships.
Eric Greco and Geoff Hampson previously won the Rosenblum in 2014.
Several of the American players have won seven medals in their careers. Nick Nickell has nine already. Zia Mahmood is up to 13, Jeff Meckstroth already 14.
These are the first world medals in history for players from Chili and Portugal. Juan Carlos Ventín remains the only player registered in Spain to have medalled, having won bronze in the 2014 Rosenblum.
Daniel Korbel is a Canadian but he is now registered for the USA.

This is a veritable Who’s Who of Women’s Bridge. Together, these women have won 22 McConnell Cups, 21 Venice Cups and 8 Olympiads/Series. They have won a total of 168 World Championship medals. Nicola Smith is the most voracious of them with now 21 medals, Sally Brock has 17, Kerri Sanborn 16 and Jill Meyers 14. Karen McCallum joins the prestigious list of players with 10 medals or more, Irina Levitina and Janice Seamon-Molson (both 11) are already on that list.

Kerri Sanborn previously won the World Women Pairs in 1990 and 2002. This is her 17th world medal in all. Jill Meyers has also already won the World Women Pairs, in 1998. She has a total of 15 world medals. Janice Seamon-Molson has 12 medals. All four American women win a second medal at these championships.
Marie Eggeling won a bronze medal earlier this year in the Wuhan Cup.

There was no B-final, but non-qualified women were allowed to enter the “side event”. Özlem Kandolu and Tuna Elmas (TUR) was the highest placed women’s pair in that event.

Włodzimierz Starkowski wins the Rand Cup in the same year as the D’Orsi Trophy (both for Senior teams).
Apolinary Kowalski and Krzysztof Martens both score their tenth medal in world championships. but they have never appeared on the same team. Kowalski’s regular partner Jacek Romański has a medal less, because Kowalski has a gold medal in Mixed pairs. Jeff Meckstroth is already up to a tally of 15 world medals, Pierre Zimmermann to 11.

Meckstroth, Zimmermann and Martens add yet another medal to their tally that already exceeds 10.
There was no Final B, eliminated pairs were allowed to play in the Side Event. The highest placed Senior pair in that event was Lech Ekert (POL) and Maciej Raczkiewicz (USA)

Geir Helgemo wins the 20th world medal of his career, becoming only the fifth player in history to achieve that total (after Belladonna, Hamman, Wolff and Smith). Daniela von Arnim now has 11 medals, Bas Drijver 10.

Klukowski and Żmuda are the second married couple to win the World Mixed Pairs, after Pam and Jon Wittes in 1986.
This is Latvia’s second medal in world championships, after the U21 teams in 2006.
Sally Brock already has 18 medals, Michał Klukowski 10. 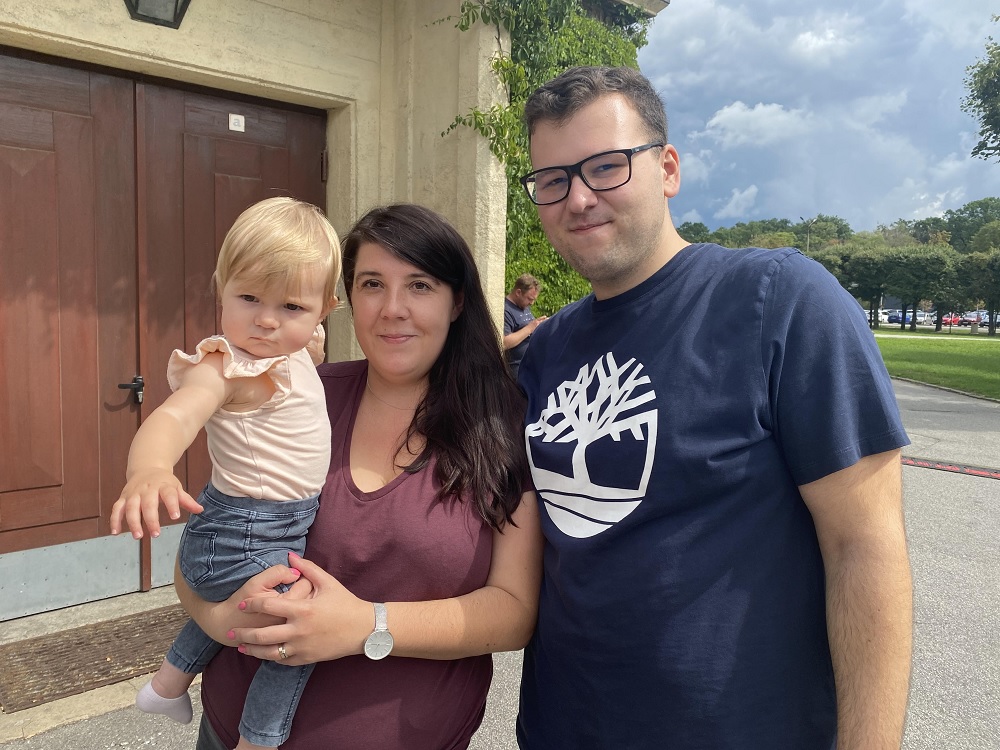 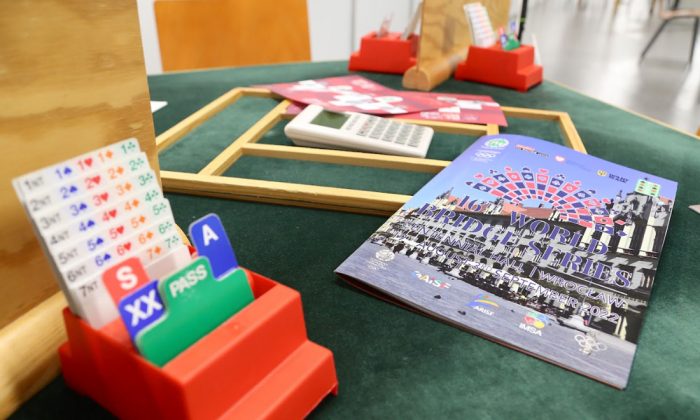 Some deals are too pretty to remain unmentioned[...]

Red is one of the most visible colours in the spectrum[...] 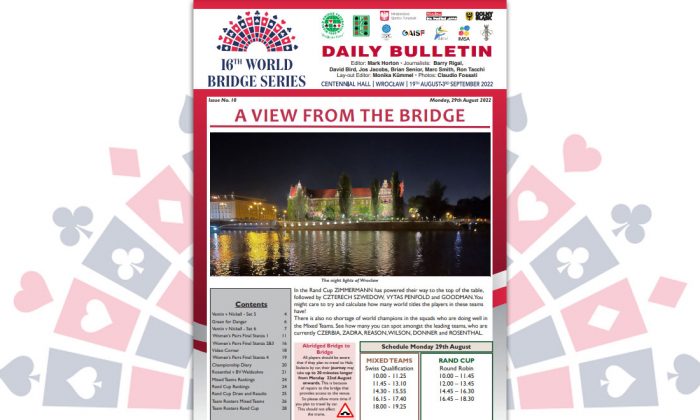 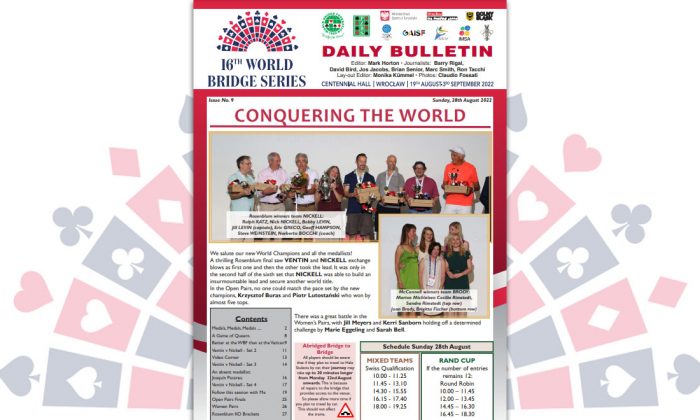 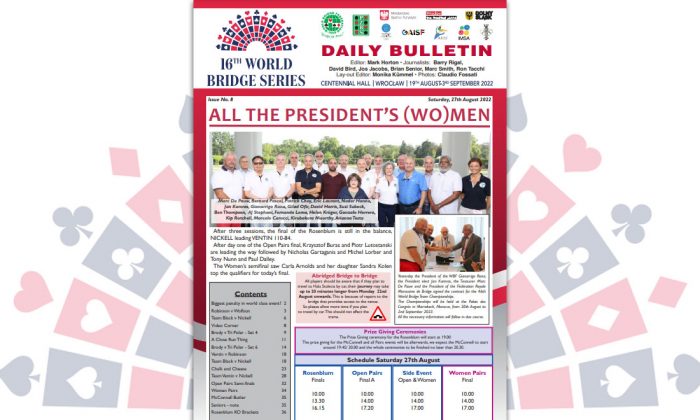 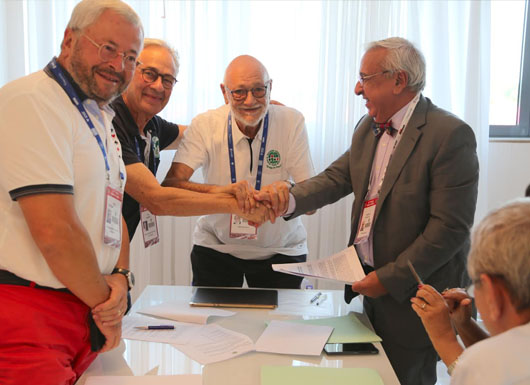 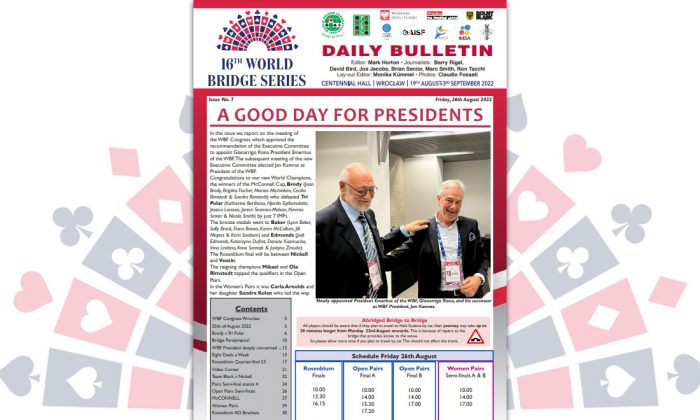 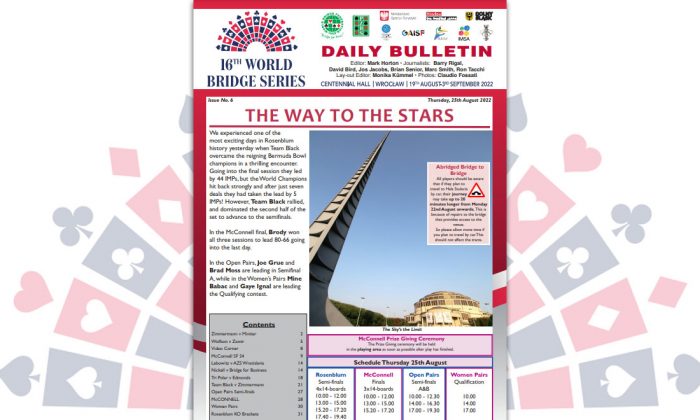